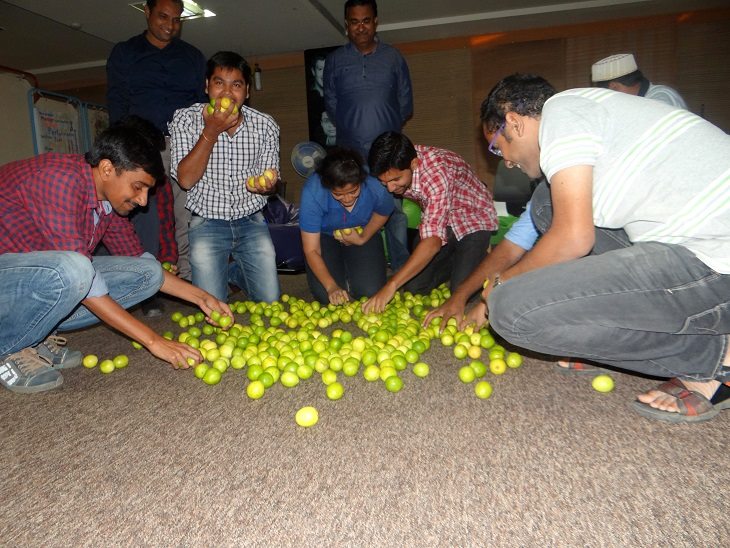 The sessions were finished and all were about to leave back to hostel. And a sudden surprise activity was planned, ‘Selling Lemons’! We were all tired but still excited.  A sack full of Lemons was brought and was unloaded in the Playfield.  We were asked to pick up as many as we could, the rest was surprise. There was rush and chaos to pick up the most. I and Aksh were a team and we grabbed over 100 lemons with no thoughts of what to do with those! And actually paid Rs.1.5 for one piece.

Vikas Sir explained the complete thing of how to go about with the activity. And then we were… ‘RIGHT IN THE REAL WORLD’ with no sense of what next. We had to sell these lemons to unknown people in the city with whatever way we could and report back to LSE before 2 p.m. Loads of discussions were taking place about how to sell these 100 LEMONS! Few of the ideas we considered were selling them raw, making lemonade out of it, making pickle, selling it in grocery market and many more. Finally after loads of brainstorming, we slept without any concrete plan saying “Jo hoga dekha jayega kal ka kal!”

Next day at 8.30 a.m at hostel, other guys too were ready with their plans to sell lemons. We still had no clue but said to each other to leave early and set a target to be back at LSE in maximum 3 hours. So, we grabbed our sacks, tightened our shoe laces, pulled up socks and rolled. (Without any vision :p)

Meanwhile we decided to go to different stores and finalized a plan of execution. We wanted to make it a social cause too. We thought to approach people and ask them to buy lemons as a social cause and that we would do a tree plantation form the money we collect and we’d actually do it. We decided to sell it at Rs.5 minimum per piece. We were then determined to move with the same concept.

The first shop we spotted open was a medical store and we stopped there. It didn’t take even 30 seconds for the owner to drive us away. Our 200% confidence was shattered to bits and pieces. Looking at each other , we had a common feeling in mind, “ Bhai, 100 lemons jyada toh nahi ho gaye naa?? :D”

Leaving from there to no-where, we spotted Eternity mall with few people buying movie tickets.  We stopped by and our ‘Radar’ started scanning out potential customers. Finally found one guy alone, we started pushing each other saying, ‘Pehle tu jaa! Pehle tu jaa!’ and realized ourselves that the fear of rejection had completely overpowered us. The moment he agreed to pay 5 bucks, that was the moment that boosted confidence in us. The movie started, the place vacated and we had to move to a new location again! But somewhere at the back of the mind we gained courage to sell. We had our first customer! Roaming around in streets, and eagerly hunting for a mob or crowd. We saw a board which drew our attention and made us enter into the institute’s campus. Students had already started gushing into the classes but we found few groups at the parking and we decided to approach them all. In the parking itself we were able to sell around 15 lemons which gained our confidence and we came to a conclusion that, YES!! We are at the right place. The lectures started and all we could see were bikes and bikes.

This made us approach to the Principal who in a very sporty manner bought 2 lemons from us and guided us to meet the Dean. We met the Dean and she was very cooperative and helpful. She asked the peon to guide as to different classes and after that, it was a CAKEWALK!! The students of the college were very excited with the idea and we added the element of ‘Helping Others’ which meant anyone who buys lemon from us will have to help a person in need. The lemon which they shall buy will be a token of commitment that they are going to help. 20 Minutes, 4 classes, 80 Lemons and BOOM!!! We were almost close to the target! The remaining lemons were sold to few policemen whom we found standing at a tea-stall. Total revenue we collected was Rs.650! And yeah, we made a profit of Rs.500!! Apart from the money, we returned LSE at 10 p.m with so many learning. The fear of rejection was long gone and we had actually won the activity with the maximum profit in minimum time and highest volume!

The power of Do It Yourself!! It works wonders!!